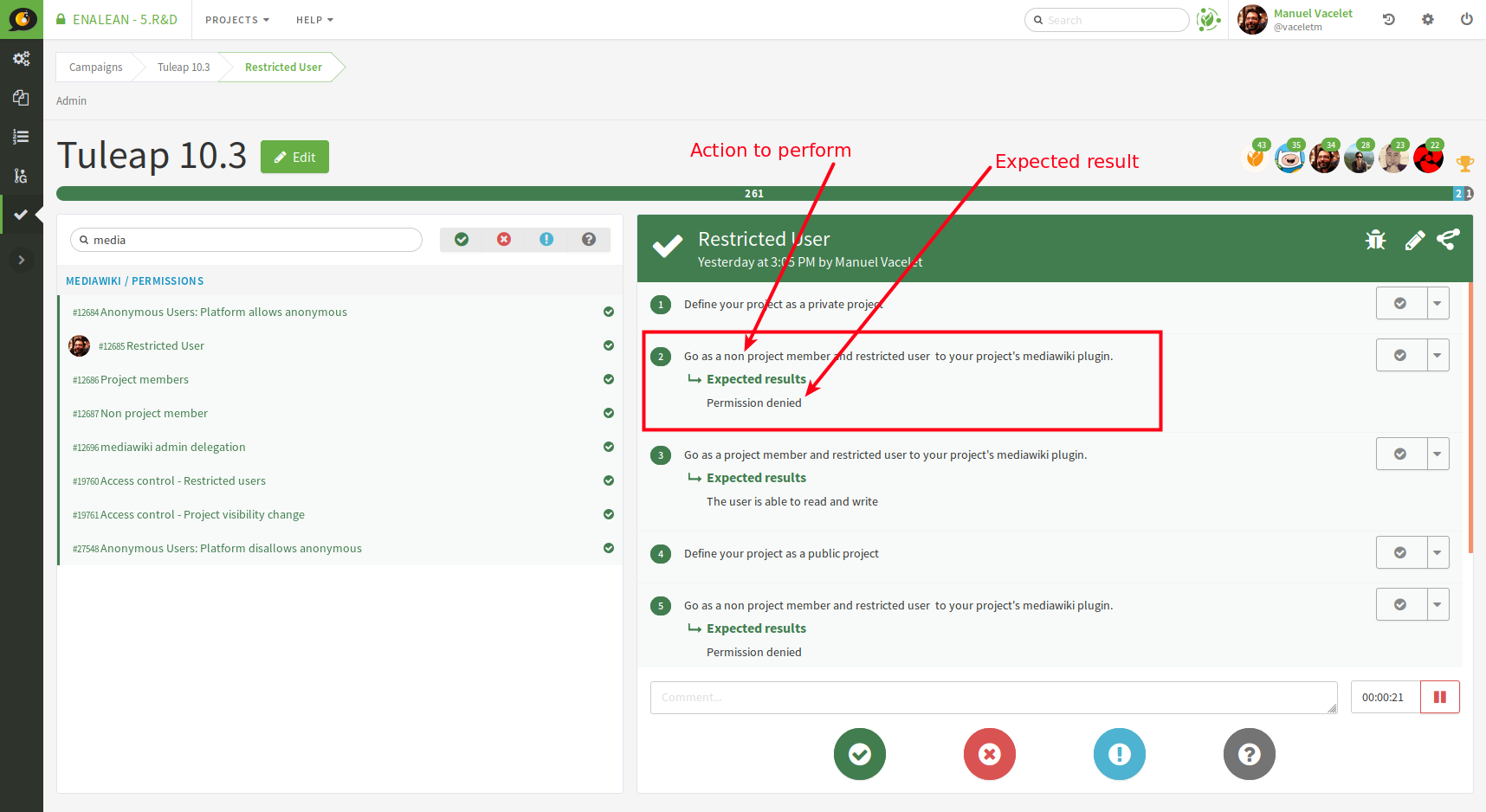 Steps can now be divided in 2 phases

Steps still have to be written directly in the underlying artifact and configured manually (see previous release) but the data structure is final and won’t change. It’s a good time to give it a try ! 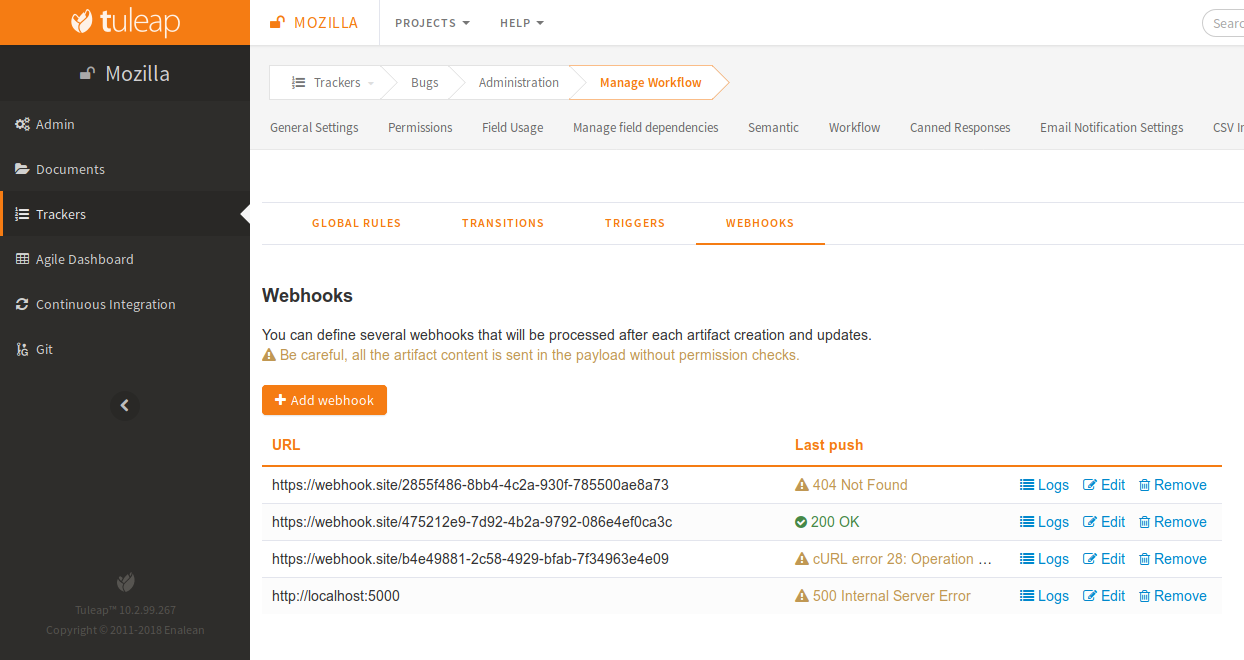 Webhooks are HTTP urls that are called every time an artifact is getting updated (including at creation). It’s useful when you want to automate integrations between various tools (like a deployment of a software). Until now it was possible to automate things with jenkins, webhooks are a generic version of that, not attached to a given transition of workflow.

You can configure them (as well as getting a status of previous executions) in Tracker administration > Workflow > Webhooks. The payload to be received is very close to what github or gitlab offers to people doing integration will be in known area. Keep in mind that the whole artifact state will be sent as a payload, including data that might be sensitive, tracker admin should be really careful to the configuration of the end point.

Under the hood, there’s been a rework of the way all webhooks are managed for being able to send them in parallel. You can even send them asynchronously if you configure a redis server. More details in request #11459 Retrieve data of multiple Jenkins jobs in parallel. 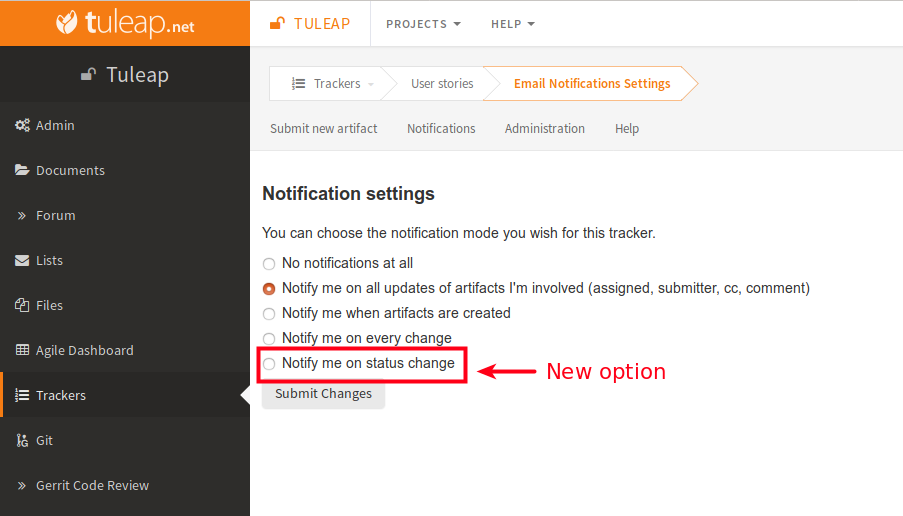 It’s an extension of story #11254 reduce notification sent by tracker to status change for the user preference part. Tracker users will be getting default notifications for a given tracker but they will be allowed to change if they want to.

The three semantics were added to move REST route. The whole thing will be accessible with a nice web UI in 10.4, stay tuned !

Tracker email notifications can now have a customized From email. Instead of having the default From: Tuleap &lt;...&gt; you can put your own string like From: Issue Tracker &lt;...&gt; or you can even make it contextual with variables %realname and %username. As From is a sensitive information in emails (often looked carefully by anti-spam filters) the informations are transformed with a "Slugifier". However if you observe mails not delivered you should disable this feature first before continuing investigations.

It’s the first contribution of new contributor Jonathan Palm from Ericsson, welcome aboard !

It’s the beginning of a major overhaul (and overdue) redesign of the git service. Tuleap provides git repositories since 2010 and back the gitweb was the de-facto standard for displaying git repositories. Github changed the paradigm with a focus on the repository content rather than history (log) by default. With more and more developers getting used to git via github it became necessary to adapt, so here we are.

It’s the beginning of the epic and you can look at what the whole thing will looks like in the mockups. In this release we focused on the way git repositories are listed as well as the technical ground for being able to make the switch to Burning Parrot theme. 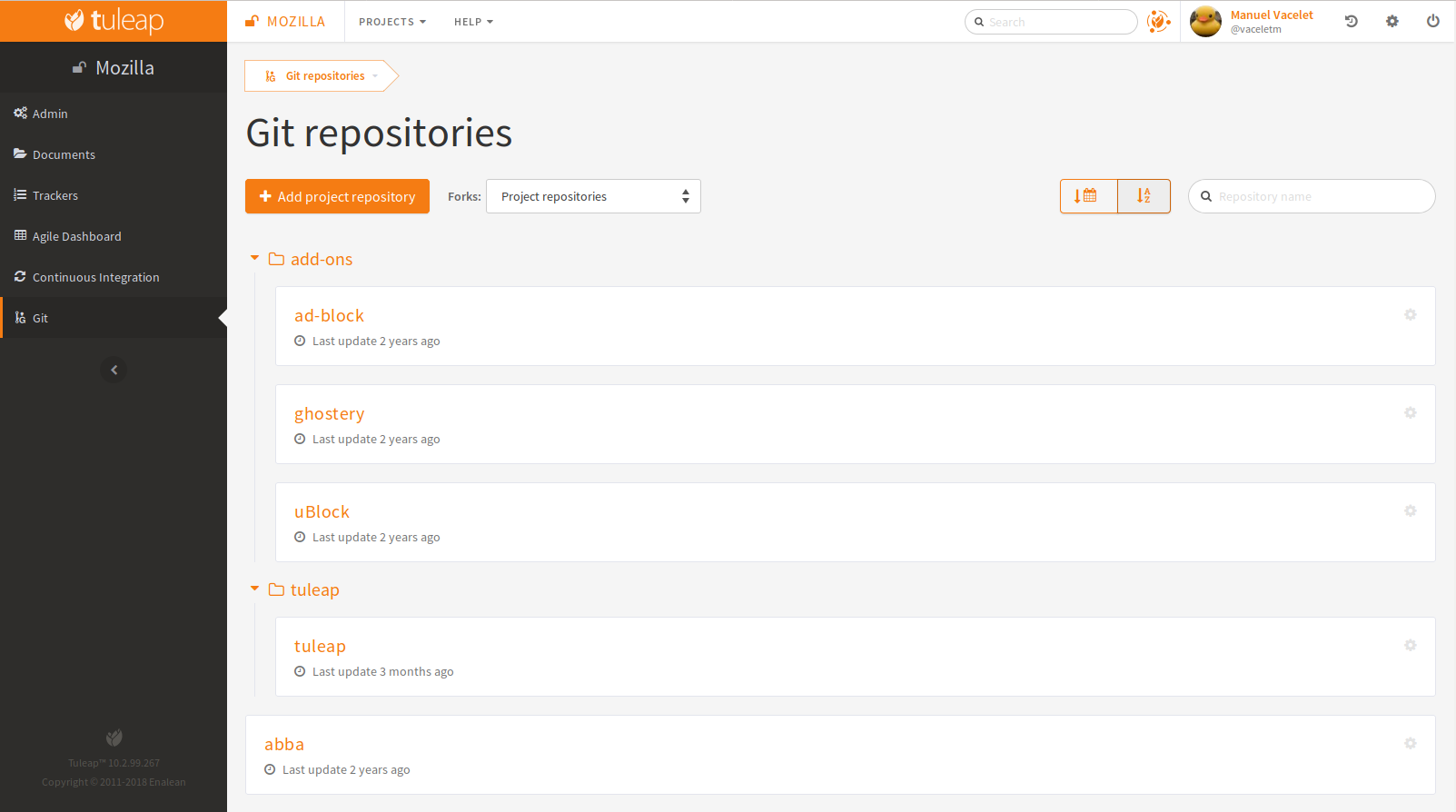 This new screen is built on top of our public REST routes so we made some modifications:

Day to day usability improvement for time tracking. Users will be able to better see how they recorded their time over a given period. It should make weekly reporting easier. 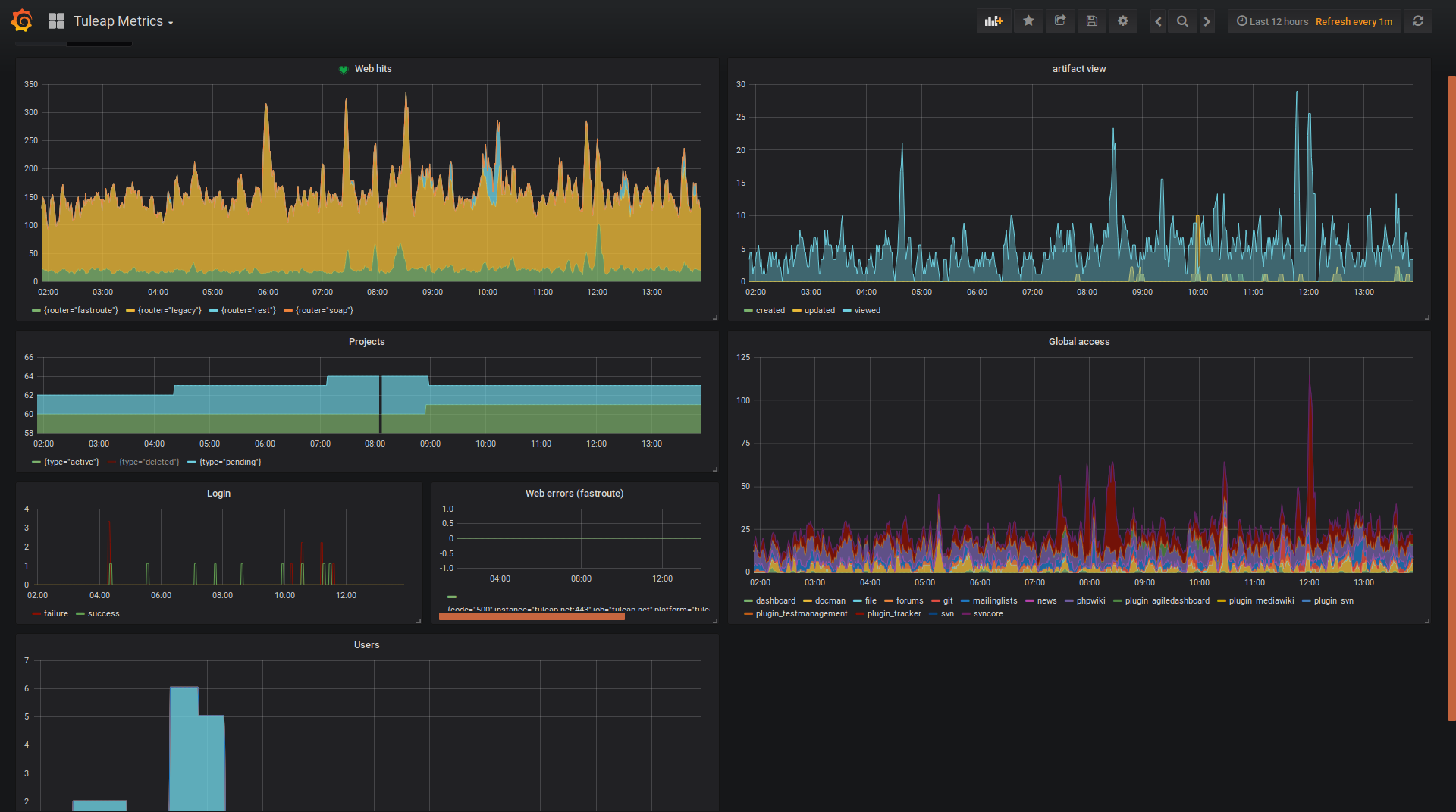 After having installed and configured tuleap-plugin-prometheus-metrics, your prometheus instance will be able to scrap tuleap metrics. Those metrics can be then rendered with grafana (see previous picture) to monitor what’s going on in real time on your tuleap instance.

What can be observed:

More information about the setup in instrumentation documentation. 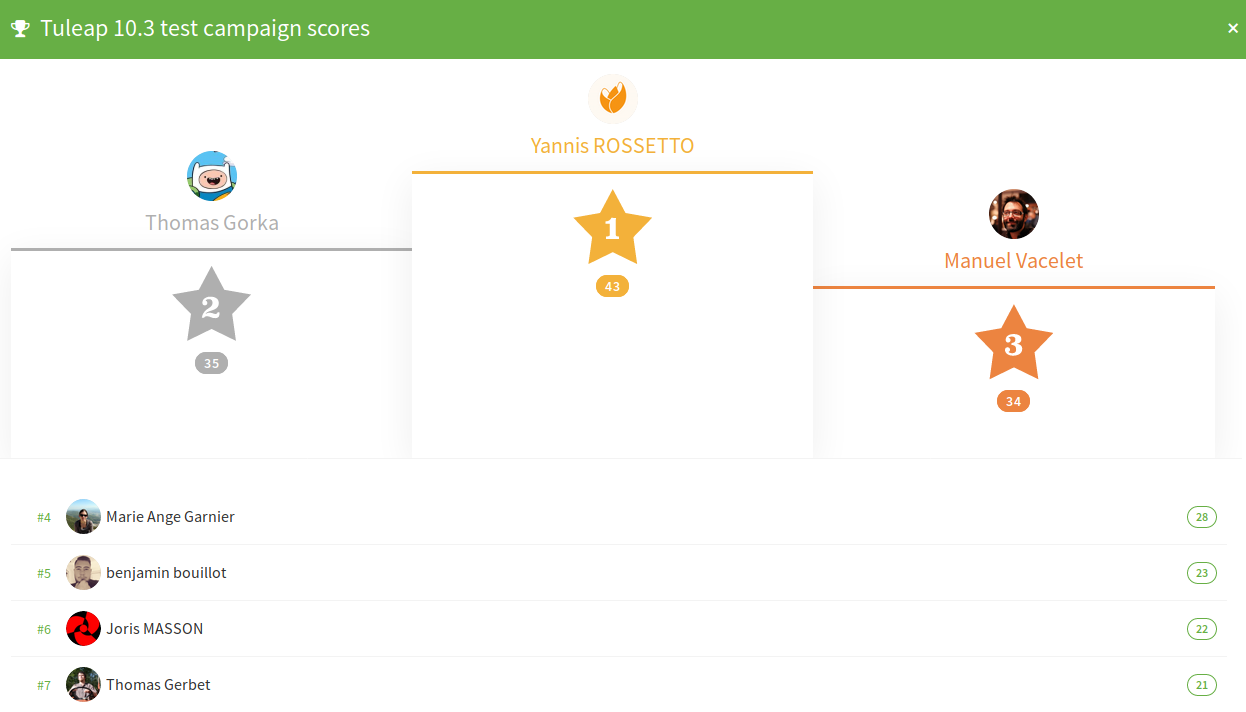